Kickstarter: Grimr's Grimoire: a Book of Myths from the Spider's Web 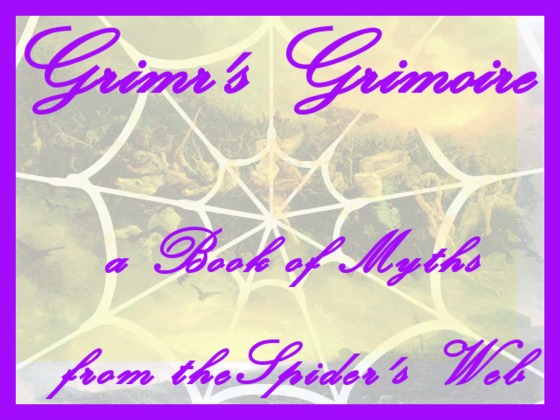 I've launched the Kickstarter project to raise funds to publish my book, if anyone wants to pledge, to help me make this happen.

Okay, I'm looking at seriously moving forward on my book that I've discussed a few times. I've been working on it off and on, and have the basic idea and structure worked out, and some of the content.

The purpose of the books is to teach the fundamentals of Grimr and my practice in a way that can be applied outside the Grimr context and lead people to a more independent, dynamic, and powerful esoteric practice. They will include myths, lore, poetry, experience, theory, and praxis in a consistent format that people with different backgrounds and learning styles can connect with. I will attempt to do in writing what is fundamentally accomplished through oral teaching. Not all readers will connect with the material, because it is essentially esoteric mystery. My hope is that enough will to make the writing and publishing of the books a worth while venture.

At the moment, I intend for all three books to have the same basic structure to each chapter. Each chapter will start with an opening poem to set the stage for the chapter and plant the seeds in the reader that will grow throughout the chapter. This will in a way be an invocation.

After the opening poem, there will be a major myth. This myth will be the core of the chapter, and all the myths in the books will tie together with larger themes. The myth will relate the core material of the chapter in story form, with the purpose stories in many cultures serve to pass down the ideas that are central to the family or tribe.

Following each major myth will be a commentary on that myth, helping the reader to connect on a conscious, intellectual level. After the commentary will be a ritual section, maybe one ritual, maybe three, not any more than that but I don't want to limit to one if the chapter lends well to multiple. The rituals will probably vary a lot in nature and makeup. I don't want to just give a script and say, do this, I want to provide a framework to help the reader develop their own while still experience the material in a tangible, usable way that will allow them to understand the material on a physical, emotional, and intuitive level. But I also want to help them be able to use what they learn from the material on a practical real level, not just creative visualization and psychobabble. And I want them to come away from the book knowing how to construct their own ritual to be able to do the work themselves and not just follow ceremony and scripts.

After the commentary and ritual sections, I'm planning on closing the chapter with a minor myth related to the first but pulling things back from head space and ritual space back into story, tying everything back together. And then I'll have a closing poem bringing it to a close.

The first book is currently slated to contain the following thirteen chapters:

1. Exitium in Initio Ponebatur: An Introduction to Grimr and the Grimoire
2. The Prophet and the Mirror: Through a Mirror Darkly
3. The Priest and the Bridge: Across the Abyss
4. The Poet and the Cauldron: Stillness and Motion and the Inspiration of Change
5. The King and the Wasteland: Sacred and Sacrificial Kingship and the Land
6. The Wanderer and the Mask: A Thousand Frightful Faces
7. The Mistress and the Blade: Hidden Lovers and Thrice Cut Threads
8. The Watchers and the Ten Thousand Things: A Myriad Divisions of Variety and Distraction
9. The Builders and the Compass: The Star Map of Eternity
10. The Weavers and the Threads of Fate: Into the Spider's Web
11. The Dancers and the Eternal Dance: The Catalyst and The Nexus
12. The Nagara and Everything: Secret Names and the Unity of Illusion
13. Ex nihilo: The Beginning of All Things

I have created a Kickstarter project to raise the necessary money to get the first book written and published. I'm hoping for publication next June (2013) if I can get the writing and footwork done by then. I have not made the Kickstarter project live yet, but hope to in the next week or two. I'm going to attempt to raise $2000 to cover the expenses to get it to press and available as an eBook with the major readers, plus provide some copies and fun items for some of those that contribute to the project. The project will only run for 30 days, and if I don't reach the $2000 goal, I won't get any of it to work with, so I'm hoping it brings in enough to make this happen.

Muninn's Kiss
Muninn was one of Odin's ravens. The other was Huginn. Muninn is memory, which is Chokmah, Wisdom, and the past; Huginn is thought, which is Binah, Understanding, and the future. Where we need to live is in Da'at, the Knowing, the present, the moment, the balance between Muninn and Huginn, between Chokmah and Binah, between Wisdom and Understanding, between Kether and Malkhuth, between the Crown and the World. That is what this journal is about. It is a mystic journey to find our way across the Abyss to truly know the ineffable, unknowable God.